Pyrrhic Paintball – How it all got started.

It was the Saturday morning after Thanksgiving in 2009 in a junkyard out in Middleton Idaho. The air was chilly as we drove down a dirt road winding past some ponds. Just as we rounded a corner a make shift camp came into view.

There were figures in camouflage fatigues huddled around a 55 gallon barrel fire warming their hands. A group of teenagers were under a canopy renting their markers (gun) and gear. A nearby table had some dads with their sons and daughters loading their paintballs into their hoppers and fitting masks. 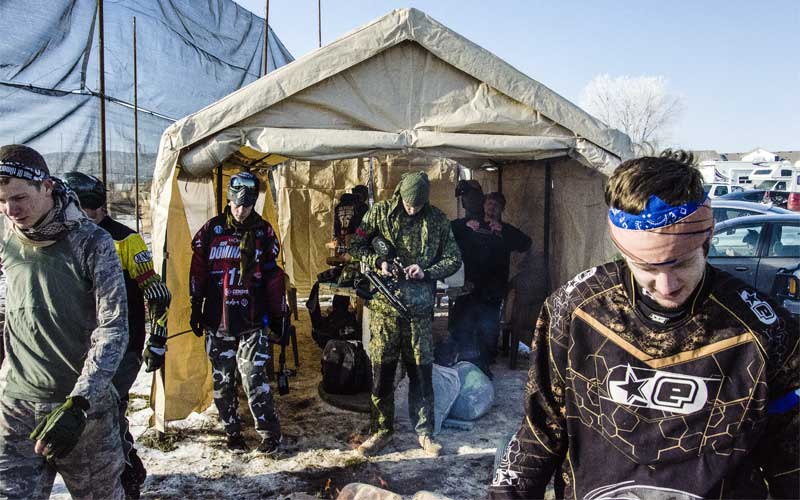 We parked by a tree and my eldest step-daughter and I headed over to rent our gear. We both were a little apprehensive due to this being our first time playing paintball. I never tried out the sport while I was younger. I was always worried of it hurting too much. I had recently picked up an old Tippmann custom 98 marker with some upgrades and a tactical vest. I rented a custom 98 for my step-daughter Marissa.

After we loaded our hoppers with blue paintballs, we walked over to the chrono station that was set up at the shore of a pond. The staffer helped us set our markers at 290 feet per second and showed us how to use our safety on our markers. After the safety briefing and explanation of the rules, we were given red arm bands to signify which team we were on. Marissa and I met up with our team at the end of a gravel road.

There were rusty fuel tanks and semi trailers on our right and some abandoned single wide trailers on our left. Piles of tires, junked cars and the occasional tree dotted the landscape.

A guy all decked out in an impressive white and black set up came over and introduced himself as Tim and his son, a mirror image, was Cody. They had fancy guns and masks and something called a “pod belt” wrapped around their waists.

Just as I think I might be a little too old for this kind of activity, Tim tells me he is in his 50’s. He started playing paintball as a way to spend quality time with his son. Tim gives us a few pointers as the referee yells to check readiness of the teams. The count of 3…2…1…GO! is yelled and suddenly Marissa and I are standing alone at the end of the road.

I decide on heading off toward some trailers off to the right with Marissa close behind. I try moving from cover to cover like the soldiers on the old WWII movies. We round the corner of a semi trailer with our objective in site. I don’t see any movement through the darkened windows so we move toward the trailer. 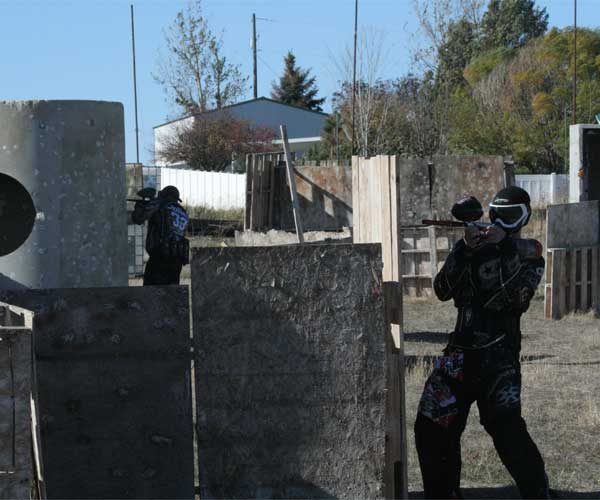 Suddenly a hail of blue paintballs were coming at us from windows and cracks of what I thought was a vacant trailer. You know when time seems to slow as your brain tries to react to something out of the ordinary?

When I realized that this blue marble coming at my head was actually enemy fire it had already hit me right on top of my head. I hear a surprised scream from behind me as I start to raise my hand indication I was out.

Marissa and I start walking back to our start point to await the start of the next game. I see the splat of paint in her hair and ask her to check my head. After several looks Marissa tells me I have no hits.

It turns out that the ball that hit my head just glanced off and splattered onto Marissa’s mask and hair. We quickly caught our breath and started to rapidly tell each other what we had just experienced. How scary, exciting and fun that one whole minute had been.

We played many more rounds that day. We shot a few “bad guys” and got “lit up” a few as well. We rode home that afternoon sharing our “war stories” with each other and having shared and experience neither one of us dreamed of only a few weeks before. I was hooked!

I started acquiring equipment for Marissa and my other step-daughter, as well as adding equipment for myself. Each visit was a new adventure, full of new surprises and fun, no matter win or lose. After a while my step-daughters lost interest and pursued their own activities and soon two of my sons joined me and continue playing with me today, no matter the weather or time of year.

Take a look around…